Pedal for the Pantry Raises Funds for Storehouse 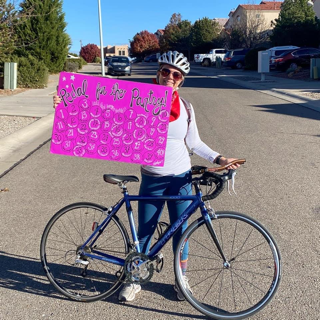 Kassi Nelson took to her bike this past autum to “Pedal for the Pantry” and raise money for the Storehouse. We love it when friends of our organization decide to do something clever and fun to support the food pantry. Pedal for the Pantry is a great example.

What is Pedal for the Pantry?

First, Kassi committed to a 40 mile solo bike ride. That meant pedaling approximately from downtown Albuquerque to Cedar Crest and back. Of course, that feat in itself if pretty impressive. Secondly, she trained for months to prepare for the long ride. Finally, she asked her friends and family to support her fundraiser. Along the way, she created fun posters and alerts for her supporters. As a clever twist, she requested that friends “sponsor” mile markers along the route. For example, if a friend sponsored mile marker 8, they pledged to give 8 dollars, if Kassi completed her bike ride. The goal was to get enough sponsors to provide 4000 meals for hungry families in New Mexico.

Pedaling to a Great Result!

In the end, Kassi pedaled her heart out. She completed the challenging ride and raised enough to provide 8,705 meals to New Mexicans in need. More than double her initial goal!

Sometimes people wonder how they can help the Storehouse or their community at all. Kassi is a great example that shows that just starting something and seeing it through can make a big difference.

It is through the efforts of people like Kassi that the Storehouse has been able to feed hungry families since 1976. As she put it, “Compassion defeats indifference and distance. It weaves people together near and far. We couldn’t have strong communities without compassionate people.” The Storehouse believes and exemplifies this kind of compassion. We are so grateful!

Ready to “Peddle” Your Own Fundraiser?

Inspired by Kassi’s “Pedal for the Pantry”? Do you have a creative fundraising idea of your own? Learn more about how to host your own fundraiser here. We welcome and appreciate your fundraising efforts on behalf of our community!